When I laid this blog to rest at the start of last year I tried to make it sound and feel as final as possible, partly for melodramatic reasons but partly to dissuade me of any temptation to keep returning and adding indulgent epilogues or self-defeating updates.

When I decided to ignore all of that and make a slight return to the blog, I knew I had to do it in the guise of something more than just an excuse to make a few partisan points about the state of public transport in London.

So I'm making a few partisan points about the state of public transport in London... with additional photos!

The recent re-opening of the former East London Line, which I last visited a few days before its closure at Christmas 2007, allowed me to do something I'd often speculated upon back when the London Overground was merely a glint in Ken Livingstone's laudably integrationist eye. Namely, a circumnavigation of the city using overland, not underground, services.

Of course, the Overground is still not quite complete; there's a gap between Surrey Quays and Clapham Junction that's a couple of years away from being joined up.

But I saw this as an opportunity, not an obstacle, and besides I hadn't been on one of the spruce new Overground trains since their introduction last year.

They are fantastic. Clean, spacious, quiet and air-conditioned, they are a joy to ride in. The air conditioning was particularly welcome on the day I made my journey, which was one of those lumpen, sticky, not-quite-the-height-of-summer days you get in the capital.

This didn't stop one woman complaining that she was cold, going so far as to assail one of the Overground staff on the matter (who inevitably, but probably correctly, said "There's nothing any of us can do about it"). 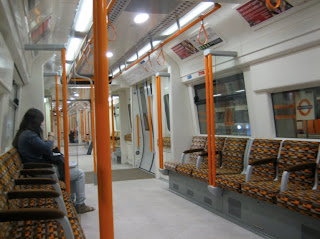 I took that photo at Dalston Junction, one of the brand new stations on the brand new bit of line that fills in the north east "gap" of the Overground circle, between Dalston and Shoreditch.

It's a smashing building, and to step inside is like entering a giant cool and elegant freezer cabinet. 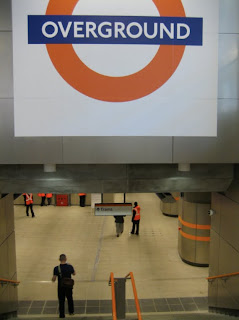 The other new stations at Haggerston and Hoxton look great as well, while Shoreditch High Street is amazing: a massive concrete hangar that squats above the titular location, into which trains slide as if docking in a futuristic transport hub. Which, of course, it is.

Anyway, I began and ended my circumnavigation at Gospel Oak, Michael Palin's own parish, using the Overground to go to Dalston Kingsland.

Here I had to change trains and cross a couple of roads to get to Dalston Junction - the two won't be connected by rail until next year - from where I got another Overground train all the way down to West Croydon.

I'd never been to Croydon before, and I don't really want to ever go there again. At least, not into the town centre, which was noisy and ugly and uninteresting save for this somewhat grand edifice: 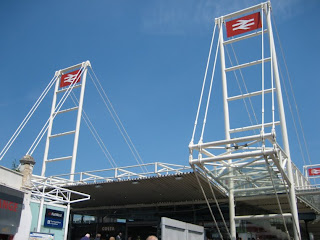 ...which is East Croydon station, outside of where I got a tram to continue my clockwise journey round to Wimbledon. The tram service in south-east London is another treat. In fact, trams in any city in any part of Britain in the 21st century are a treat. I sat up the front so I could see through the driver's windows and right down the line.

I love the way these tracks sneaked across roads, around gardens and behind hedges, until suddenly arriving at Wimbledon. The only downside to this leg of the journey was that I was sitting facing an old man and his grandson, and I didn't want to eat my lunch for fear of looking too coarse.

To complete the circle I had to then nip up the main Waterloo line to Clapham Junction, from where the Overground resumes its course round to Willesden Junction, which is an absolute sink of a station.

To be fair, it only exists as an interchange and hence has no reason to entice new passengers in or kick existing ones out. But still. Even its surroundings are rotten: 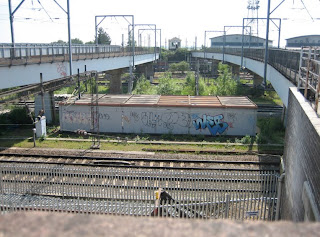 From there it was on to yet another Overground train, this time one of the old rolling stock, to get back to Gospel Oak.

What was the point of this excursion, arriving at precisely the same place from where I departed?

The point, as ever, was the journey itself, not the destination. The London Overground is a real asset to the city, and all the years of investment and redevelopment have utterly paid off.

I couldn't believe how quickly I was out of my stamping ground of north London and heading through the unfamiliar acres of Forest Hill, Penge and Norwood (the latter only known to me before now by virtue of its setting for a particularly fine Sherlock Holmes story).

When the circle is complete there'll be no need to go as far south as I did, so you won't need to use the trams.

But, as I said earlier, this obstacle is, for the time being, an opportunity for like-minded souls to sample another bit of London's vast public transport network - one whose future, sadly, is in even more peril than when I previously signed off, thanks to the newly-installed coalition axemen.

I suspect the completion of the Overground is too far down the line, literally, for any of its remaining upgrades and additions to be binned off.

But as for the next set of proposed new transport links, not least the incredible Crossrail, I fear Boris Johnson is even now trying to bury them deep enough in his waste paper basket so Ken can't find them come 2012.